FOR many Puerto Ricans in New York, retaining ties to their ethnic roots is an important part of creating a bicultural identity, one that often includes regular visits to the island or practicing Spanish. That duality is represented in a new film called “200 Cartas” (“200 Letters”), which stars Lin-Manuel Miranda as a New Yorker who visits Puerto Rico in search of a woman he has fallen in love with. 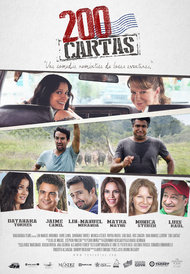 The movie, set in Puerto Rico, was financed in part through partnerships with local companies.

The story, a family-friendly romantic comedy, follows Mr. Miranda’s character, Raúl, and a small group of friends who come together to help him on his mission to send letters to all 200 of the women named María Sanchez who live in Puerto Rico. His hope is that one of the letters will reach his beloved. The film also stars Jaime Camil, Mayra Matos, Monica Steuer and Dayanara Torres.

The film, which made its debut in New York in June and will have its theatrical release in Puerto Rico on Sept. 12, was financed in part through product placement and brand partnerships, said Roberto Alcazar, an executive producer. “It’s not only the brands in the film,” Mr. Alcazar said. “It’s the whole plan of creating a marketing strategy so they can use themselves in the film’s assets.”

Many of the products seen in the film are from Puerto Rican brands like Banco Popular and Bacardi. Bruno Irizarry, who wrote and directed the film, said he wanted to incorporate brands that were “everyday products that everybody uses.”

“That was one of the first things that I was very specific about,” he said. “How to bring in partners that support the arts and what we wanted to do, but make it not in your face.”

The product placement is subtle. In one scene, the group eats lunch prepared by a roadside vendor who uses Goya seasoning when he cooks. In another scene, which takes place in a bar in New York, the characters drink alcohol from Diageo. Raúl and his friend Juan, played by Mr. Camil, work at Banco Popular.

Mr. Alcazar said the film was made for about $1.2 million, which included money from private investors and advertisers and the Puerto Rico Film Commission.

“My goal was not just to get money, but to create a platform where we were going to get sponsors to be part of the marketing team,” Mr. Irizarry said. To that end, some of the brands will also help market the film. A.T.M.’s for Banco Popular will feature ads promoting the film, and the bank will give away tickets to customers named María Sanchez. Banco Popular also provided the filmmakers with billboard space and a float in the National Puerto Rican Day parade in New York in June. Mr. Alcazar described the parade as the “biggest platform to promote a Puerto Rican film in New York.”

Digital banner ads, film trailers and behind-the-scenes videos will be displayed on advertisers’ social media channels. Advertisers including Target Rent a Car and Bacardi will host private screenings of the film. Goya will have promotional materials for the film on supermarket shelves where its products are sold.

Mr. Irizarry said he estimated the total value of these brand partnerships was about $300,000 in cash and related marketing. Additional brands featured in the film include the newspaper El Nuevo Día, Toro Verde Nature Adventure Park and the Villas del Mar Hau hotel. With the exception of El Nuevo Día, which was both an editorial and brand partnership, all of the featured brands paid for their inclusion in the film.

Manuel Chinea, chief operating officer for Popular Community Bank, the name for Banco Popular in the United States, said the film was “one of those projects that connects the island to the mainland.”

“We felt that the appeal of the movie was going to be to a wider audience in the U.S., not just to Puerto Rico,” Mr. Chinea said. “The bank has always been committed to supporting entrepreneurs and individuals who are doing things in creative ways.”

Being a part of the film could also help the bank extend the awareness of its brand to new customers in the United States, Mr. Chinea said. “As we look to be more efficient and effective with our marketing dollars as traditional media loses effectiveness, we certainly need to find new ways of connecting with our audience,” he said.

Luis Álvarez, a vice president at Méndez & Company, a distributor for Diageo products, agreed. “Marketing and communications have become so exploited and so badly used that one has to find a way to do it honestly and sincerely,” he said.

Gabriel Reyes, the press director for the New York International Latino Film Festival and the president of Reyes Entertainment, said filmmakers were increasingly using brand partnerships to secure funding for their films. “I think independent producers now that really go out and raise money are becoming a lot more savvy about how they can go and take advantage of these opportunities,” Mr. Reyes said.

Finding organic ways to put advertisers into a script is critical to making the product integration seem natural, he said.

“We know people cook with Goya,” Mr. Reyes said. “It’s not some foreign brand that no one has seen.” But perhaps the best way, he added, to get an advertiser to sign on for a brand partnership is to have a well-known actor in the film: “In this case it was Lin-Manuel Miranda. It’s easier to get that deal than if it was somebody out of the blue.”